On December 4, 1963, St. Paul VI (Pope) promulgated the Constitution on the Sacred Liturgy [Sacrosanctum Concilium].  In so doing, he provided a rationale for the reform and promotion of the liturgy, “whereby the faithful may express in their lives, and manifest to others, the mystery of Christ and the real nature of the true Church” (SC, 2).  In addition to highlighting the sacramental nature of all liturgical worship, this foundational reforming document reminds us of the essential purpose of sacraments: “to sanctify [humanity], to build up the body of Christ, and finally, to give worship to God” (59).

In the liturgy, as opus Dei, Christ continues his priestly work through the Church, which “is ceaselessly engaged in praising the Lord and interceding for the salvation of the whole world. She does this, not only by celebrating the eucharist, but also in other ways, especially by praying the divine office” (83).  Our full, active and conscious participation in this unique liturgy not only praises God, it also sanctifies the whole progression of the day.  When we pray the divine office, we offer praises to God as we stand “before God's throne in the name of the Church” (85).

Pope Benedict XVI and Pope Francis, each on different occasions, reminded and challenged the Carmelites: “Carmel teaches the Church how to pray.”  Though the Order historically has never generated a specific “method,” it has consistently stressed time and energy put into prayer, or personal prayer.  According to Jack Welch, O. Carm., personal prayer, specifically contemplative prayer, “is not a lifestyle, but an attempt to listen to God always” (www.carmelites.net/vocations/meet-a-carmelite/meet-father-jack-welch/).  On Wednesday, October 7, 2020, while preaching to the faithful in St. Paul’s Hall, Pope Francis highlighted prayer as a quintessential quality of Elijah the prophet that gave him the ability to discern God’s will and denounce injustice.

According to the Carmelite Rule, “Those who have learned to say the canonical hours with the clerics should do so according to the practice of the holy Fathers and approved custom of the Church” (The Rule of Albert, 11).  As the Rule makes clear, each Carmelite must pray daily the official “Prayer of the Church.”  But what does liturgical prayer (the divine office) have to do with personal prayer (contemplation)?  Perhaps the answer lies in Sacrosanctum Concilium: “…the public prayer of the Church…is a source of piety…and nourishment for personal prayer” (90). The liturgical prayer of the Church provides one with the sacred texts (psalms, canticles, stories, letters), the ever-ancient/ever-anew dialogue between God and God’s people that can in turn nourish and strengthen the Carmelite’s “experience of God” (www.carmelites.net/vocations/meet-a-carmelite/meet-father-jack-welch/).

“The Sant’Angelo-Style”: In 2008, the Province of the Most Pure Heart of Mary (PCM) approved and founded a community in the Hyde Park neighborhood of Chicago.  The community was named after Sant’Angelo of Jerusalem, a 13th century Carmelite saint who left Mount Carmel to begin a more active, mendicant life in Sicily.  According to lore, he also was charged to obtain from Pope Honorius III confirmation of the new rule (http://www.santiebeati.it/dettaglio/51875).  This newly formed community of the Ancient Observance committed itself to live within the tension of community-prayer-ministry.  The community prayed Morning Prayer, Evening Prayer, Night Prayer and silent prayer in common.  Because of its commitment to be as “inclusive” as possible with regards to prayer language, the community used a translation of the psalms by Roland Murphy, O. Carm.

Moreover, the structure of Morning and Evening Prayer followed the “cathedral office,” with its distinguishing feature of a consistent opening psalm (psalm 95 and psalm 141, for morning and evening, respectively).  Pursuant to Sacrosanctum Concilium, most of the office was sung (SC, 99).

Currently, we only have Night Prayer (“Compline”) ready for use.  As the year progresses, we will continue to produce audio and visual texts for "the Sant'Angelo-Style" Morning and Evening Prayer for each day of the year, as well as music for meditation use.  We envision the process to be completed within a year.  We hope that this website will help lead to a deeper, richer prayer life for any and all who use it. 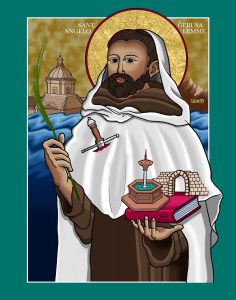 Icon of Sant'Angelo of Jerusalem written by Kristen Satkas.